The Cincinnati Women’s Pro-Am was a long, crazy, energy-filled weekend and It’s taken me more than a few days of reflecting to finally be able to put my thoughts and experiences into words.

The adventure started before the competition even began. First of all, it’s been two years since I’ve cut weight, so I knew competing at 132 instead of 148 was going to be a challenge in and of itself. This is also the farthest I have ever travelled for a meet and it’s the first time I’ve flown instead of driving. My entire cutting process/experience is enough for a separate blog, so let’s just say our travel included one cancelled flight and one delayed flight that resulted in our arrival being 8 hours later than originally planned and I cut 8.8 pounds, stepping on the scale at 132.2 on the dot at weigh-ins.

I put my weight back on well the evening after weigh-ins and woke up feeling good. When we arrived at the meet venue, it was overwhelming. There were women EVERYWHERE. This shouldn’t have been a surprise since there were 79 women competing, but it’s something I’ve never seen at a powerlifting meet before. It was pretty incredible. The meet started right on time at 8:30 and since I was in the second flight of lifters, I started warming up for squats when the first flight started.

Squat warm-ups didn’t feel great, but they weren’t terrible either, they were just moving slower than I like. The first flight was flying through their attempts, so getting in my final warm-ups was pretty hectic. For my last warm-up set, which I do in knee wraps, I couldn’t find people who originally said they would wrap my knees, but I was lucky enough that Rheta West was both available and willing to wrap me. If you don’t know who Rheta is, you must have been living under a rock because she’s one of the strongest women alive.

My opening squat of 235 was good, but felt a still little heavy and slow, so I only went up to 250 on my second attempt. When I stepped onto the platform again, 250 actually moved better than 235 had, so I planned another 15 pound jump to 265 for my third attempt. Before this meet I had only ever had one person wrap my knees and we had a great system in place. Rheta wrapped me for my first two attempts, and her wrapping was different than what I was used to, but worked for me. Unfortunately for me, when it came time for me to take my third attempt she was helping a lifter from her gym warm up, and was warming up herself, so she wasn’t available.

Rheta’s significant other, Pete, wrapped me for my third attempt and it felt tight, but his style was very different from what I am used to. When I stood up, the knee wraps shifted a bit so I had no idea how they would feel. I took my attempt and just didn’t get what I needed to out of the wraps to get out of the hole, so I missed it. Being able to perform regardless of how my knees were wrapped is one thing I just wasn’t prepared for so I felt incredibly lucky that people who didn’t owe me anything, one of whom was competing herself that day, were willing to help me out so I could put up the numbers I did since there is no way I would have been able to squat those weights without any wraps at all.

Since this was a big meet (there were 4 flights of 15-20 lifters each) I had a while to wait between squat and bench. They were serving bbq pulled pork sandwiches and I couldn’t resist having one myself. It was so, so good and hit the spot. Watching the third and fourth flights of squat was incredible. There were women squatting 500+ pounds raw and 600+ in squat suits. Rheta squatted 700 pounds but her knee buckled at the top causing her to miss the lift. I don’t think many women could imagine even just standing with 700 pounds on our backs, let alone squatting it, so that sight was mind-boggling.

Moving on to bench. For those of you who aren’t familiar with cutting weight for powerlifting, the bench press is normally the most greatly affected, even if it’s a good cut and weight is put back on properly. So, going into bench warm-ups, weights were moving well, so I was optimistic, but also wanted to proceed cautiously in case things changed once weights got heavy. At the March meet I was very out of the groove and my benches were not pretty and I only went 2 for 3 so going into this meet I had already planned a conservative opener of 150- 5 pounds less than what I opened with at the meet in March. Things felt good all the way up to my final warm-up set so I was just focused on nailing that first attempt.
My opener of 150 went right up. Now, I had the choice of going either 155 or 160 for my second attempt. I am traditionally not good at taking jumps of more than 5 pounds when I am close to my bench max (this is something that I’m working on) so I opted to just go to 155. For this meet, I wanted to go 3 for 3 on bench, so it was worth it to me to stay conservative. I got both my second attempt and third attempt for bench, ending with 160, giving me a 410 sub-total going into deadlifts.

I had another couple hours of waiting/relaxing ahead of me, so what did I do? I enjoyed another pulled pork sandwich, of course! There were some incredible benches that day, too. I couldn’t even tell you how many women benched 200+ pounds, many of them raw! Hitting 200 on bench is one of my long-term goals, so seeing multiple women do it in one place was a huge inspiration. It won’t come all at once, but I’m willing to improve 5 pounds at a time.

And then, there were deadlifts. In March, I was pleasantly surprised with how well my deadlifts went and I was hoping for a great day so I could hit a big PR total. However, warm-ups felt extremely heavy. Everything was coming up, but I just wasn’t 100% on. I actually had nerves before my first attempt of 285. It was a weight I knew I could get, even on a bad day, but I still had butterflies. I went out and completed the pull- man, it felt heavy. Based on how it felt, I put in the smallest jump that was part of my game plan- just 10 pounds. The runner taking attempts questioned that choice and said my first attempt looked easy, but I had to go with how I felt. I hit my second attempt of 295, which put me in position to take another small jump to 305. This was the lowest third attempt in the range I had mapped out for myself, but it was still enough to finish with a 5 pound all time total PR, at a lighter weight class to boot. I hit my 305 deadlift and secured a 715 total at 132.2.

In addition to all of the lifting, I got to meet some amazing women. Some who I’ve never talked to before , or even heard of, and others who I’ve “known” for years through social media, but never seen in person. I know I won’t remember everyone, but the top three women is was amazing to meet were Laura Phelps Sweatt, Gracie Vanasse, and Canadace Puopolo. Laura ran a spectacular meet, Grace was on her feet, coaching, firing up, and congratulating lifters all day, and Candace performed like a champ despite having rough training leading up to this event. There were women of all levels, with different personal goals, ranging from just getting a total in their first meet to setting records. And, that’s the great thing about powerlifting- if you’re willing to do the work, you deserve to be on the platform. 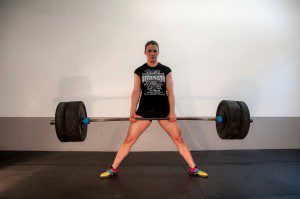